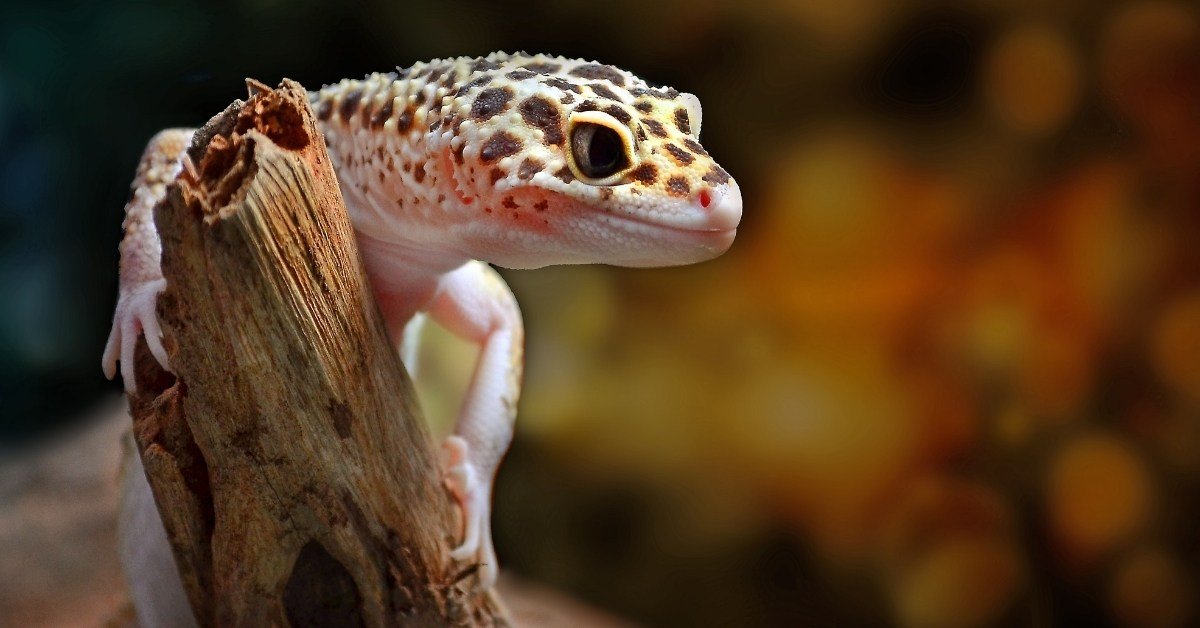 Leopard geckos pee and poop out of the same hole, which is called a cloaca. This means that both feces and urine come out simultaneously, giving the poop a unique look.

Healthy gecko poop will be a dark brown pellet, sometimes obscurely shaped. It should be around a quarter of the length of your gecko’s tail. It’ll also come with a solid white substance on the end.

The white section is made up of urates (a solid white crystal created from the urine). To be healthy, the poop needs both the brown part and the white part to be attached.

Let’s go over how to identify unhealthy leopard gecko poop and know when something is wrong, and what is wrong.

Yellow urate could be a sign that your gecko is dehydrated.

Geckos collect most of their water from their food sources, so it’s possible that the food you’re giving them isn’t the freshest or has a low hydrational value.

Ensure they always have a bowl of clean water in their terrarium, give them hydrating vegetables, and give them a bath to help them take in water through their cloaca (yes it takes in water too).

Runny poop or diarrhea is a sign that your gecko has too much water in their diet.

Geckos survive mainly on live food – crickets or mealworms. If they have a richer diet too often (silkworms or butterworms), then it’s likely to put too much pressure on their digestive system, causing a stomach upset and water loss.

Eventually, runny poop can lead to dehydration too, as they lose the water too fast.

If your gecko has no urate in their poop at all, this could indicate that they aren’t eating or drinking enough, as they aren’t taking on any water.

You should immediately place them in a warm bath to get some fluid into them and ensure the humidity is at the right level in the terrarium to give them a nice, moist environment.

If any of this continues for 2-3 days, you should visit the vet for a more in-depth diagnosis.

How Often Do Leopard Geckos Poop?

Adult leopard geckos should produce a decent-sized poop once every 1-2 days. This shows that they’re eating and passing the right amount while getting all the food’s possible nutrients.

Babies, up until the age of 1 year may poop 2-3 times per day as their metabolism is much faster.

If your gecko hasn’t pooped at all in 4-5 days, you’ll need to consult a vet as it’s likely that something is wrong.

Leopard geckos are creatures of habit. Much like rodents, they’re territorial with their feces and will make their toilet a single corner. You’ll notice that they always poop in the same place.

If anything changes about their environment, they might get confused and put off pooping.

How To Resolve Confusion

Changing their habitat for enrichment purposes is a great idea, as it stimulates their brains and gives them something to do. However, it’s a good idea to leave their normal toilet area alone to avoid putting them off.

Even something as simple as using a new cleaning product in their terrarium can cause some confusion. As this isn’t a medical issue, it’ll usually resolve itself within a day or two.

The symptoms of dehydration are:

If your gecko has any of these issues, it’s likely due to dehydration, which can eventually stop them pooping altogether. Either the poop is too solid to be able to push out, or they’ve stopped eating, meaning there’s nothing to poop.

How To Resolve Constipation

Constipation due to dehydration isn’t common in leopard geckos and can usually be resolved with a few simple steps.

Impaction is when a blockage forms in your gecko’s digestive system, stopping any food passing through. The blockage could be formed from:

Substrate picked up from the floor and swallowed accidentally. Try to use reptile carpet on the floor of a terrarium rather than sand, soil, or shavings as this removes the potential problem.

Insect casings. You should only feed your gecko crickets or mealworms which are smaller than their head size. When geckos eat, they normally crush their food, rather than chewing every little bit to pieces. If they have a large cricket, the hard outer shell might not get broken down properly and can get lodged in their digestive system.

Shedded Skin. When leopard geckos shed their skin, they’ll typically eat a large portion of it as they might use their mouths to help pull it off their body. If a particularly large piece is swallowed whole, this can cause impaction.

How to Resolve Impaction

Impaction can cause major health issues which can eventually lead to paralysis if not dealt with quickly.

If you notice that your gecko hasn’t pooped in a while, try running a warm bath up to their knees to help coax out the blockage. Gently rub their stomach to stimulate movement under the water.

If you don’t achieve any poop within the next day or two, book in with your vet. They may be able to supply you with some reptile friendly laxatives to shift the blockage.

Your gecko might not be pooping because they simply aren’t eating. Although this seems like a simple solution, it does mean that you’ll now need to work out why they aren’t eating.

Hopefully, you’ll notice that they’ve lost their appetite quickly, as you’ll feed them every couple of days. If they’ve gone off their food, it could be because:

(If this is the issue, be sure to read our full guide about leopard geckos not eating)

How To Resolve Loss Of Appetite

Types Of Food: The first thing you should try is changing up their food slightly. Is the food you’re providing alive and fresh? Dead food is unlikely to be eaten, and food that is sick can put your gecko off. Try a few different types of food to see if anything changes.

Shedding: If you can see that their skin has become noticeably paler, it’s probably because they’re due to shed – not eating, in this case, is completely normal.

Egg-Laying: Geckos will likely eat a lot up until the few days before egg-laying, then might stop altogether for a while to find a suitable spot to lay and bury the eggs. She should be back eating again a few days later.

Heat: The terrarium should be kept at a constant 31-33°C (88-92°F). If the temperature drops too far or too quickly, this can put them off their food. Make sure you get a thermometer to track this.

Illness: If your gecko has stopped eating because they’re sick, there are likely to be other symptoms. Look out for:

Depending on the other symptoms, you’ll be able to determine an illness and deal with it accordingly.

If your leopard gecko hasn’t pooped in a while or has had abnormally shaped or colored poops then you should seek medical attention. Although some of these issues can be resolved from home, if the don’t pass within a few days they can become dangerous.

This is all for leopard geckos poop! If you have any more questions, let me know in the comments below.