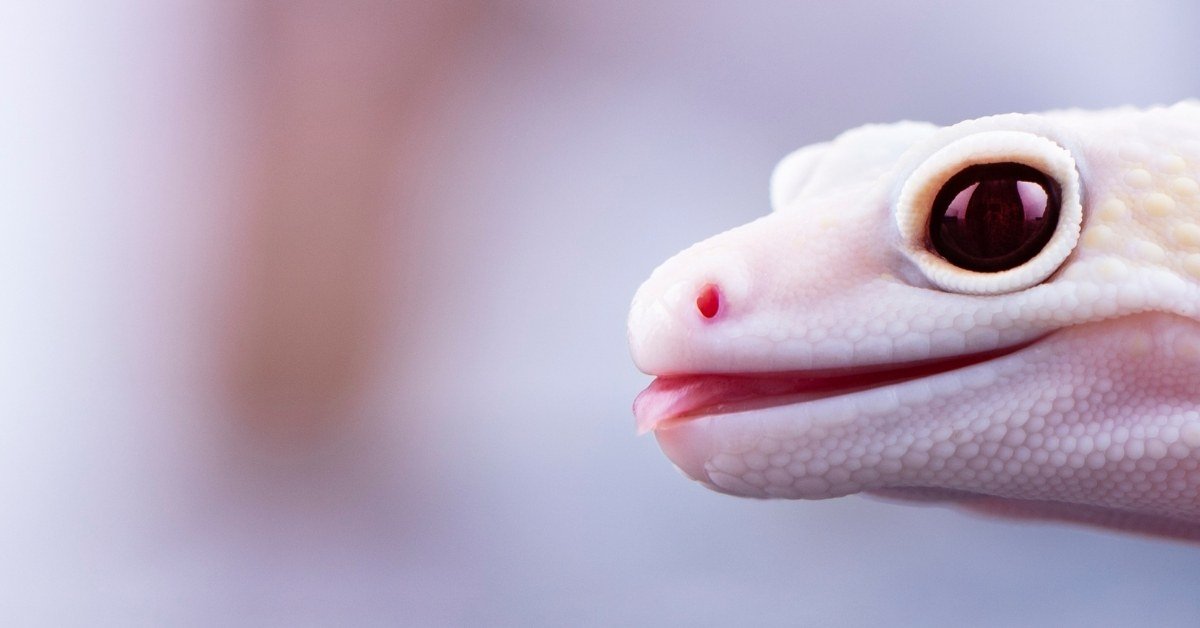 Leopard geckos are docile creatures, they usually lay around in the heat, sometimes exploring or strolling to their food or water bowl.

But do leopard geckos make noise? Well, leopard geckos are usually relatively quiet, and you’ll rarely hear them making any noise at all. However, when you do hear a distinctive noise, it’s probably because they’re trying to tell you something.

So let’s go through the sounds you might hear coming from your leopard gecko, and what they mean.

Chirping sounds much like a small bird or even a cricket noise. It’s a cross between a squeak and a tiny cough. This sound can mean many different things.

Chirping is your gecko’s way of trying to tell you that they aren’t happy with something. Usually, it’ll happen if you’ve picked them up awkwardly or if they just don’t feel like socializing that day.

Remember how small and delicate they are – even slightly squeezing might hurt them. So make sure you always pick them up gently with your fingers behind their armpits and support them from underneath so that they feel safe.

And if they chirp, put them down gently and give them a break.

It has been known for a gecko to chirp if they’re hungry. It’s their way of demanding food and telling you that you’re late providing it. Once they have a full stomach, the noise should stop.

Generally, chirping with no other apparent symptoms isn’t a sign of illness, it’s just a sign that they’re unhappy, so there’s nothing to worry about.

A chirping noise alongside a wide-open mouth and obvious tensed muscles can also mean that your gecko is suffering from constipation or impaction and is struggling to poop.

These things can happen if they eat crickets or other insects which are too large for them, as they don’t chew up the body correctly. The insect casings can then cause a blockage in their digestive system, meaning they’re unable to pass anything.

It’s also possible for them to accidentally swallow some substrate from the floor of the terrarium when they’re striking for food. Sand, soil, or shavings from the floor can cause a blockage. A reptile carpet would be a better choice to avoid this issue.

Giving them a warm bath might help to loosen any stool that’s stuck. If you don’t see any improvement and there’s no poop around the terrarium either, you should take a trip to the vet for further treatment.

Squeaking is a shortened version of a chirp. It’s a similar sound to one that a mouse might make.

Squeaking is normal behavior and doesn’t mean anything is wrong. It’s their way of signaling to a mate if one is close by, or even a contented noise if they’re just off exploring.

Geckos are naturally curious creatures, and unlike a lot of other reptiles, they don’t spend their whole day basking. Enrichment activities, such as changing their scenery or toys within the terrarium can keep them happily squeaking away.

It’s a warning sound that will let you know that your gecko isn’t really happy and might feel threatened or stressed.

What to Do if Your Gecko is Clicking

If you start to hear this sound regularly, there may be something in the environment they aren’t happy with.

If you’ve recently moved their terrarium to a new place or changed the terrarium contents around, it may just take them a little while to get used to the new setup. Once they’re more comfortable, they’ll probably calm down.

If nothing has changed recently and the clicking continues, check:

Screeching is the loudest noise you’ll hear your leopard gecko make and if you don’t know what it is, it can be quite alarming.

When you hear it, the shock that you feel is the exact reaction that your gecko is hoping to achieve from a predator. Screeching is a leopard gecko’s defense mechanism.

You’ll usually notice this alongside other forms of defence which can include:

If your gecko is screeching repeatedly and displaying other defensive behaviors, there’s definitely something about their environment that they don’t like.

Ensure they’re in a quiet room and closely monitor them to see if the removal of outside stimuli makes them feel better.

If they live with another gecko and they’re displaying these behaviors, it’s possible that they don’t get along, causing both, or one of them, to screech. If it’s not working out, split them up.

Yes, leopard geckos can bark! The sound is similar to chirping, but it’s much hoarser and deeper.

It’s actually a more aggressive version of chirping and can occur if your gecko is frustrated and even angry. If you hear this noise when you’re holding your gecko, it’s likely to come right before a bite.

Gecko’s bites don’t hurt too much as their jaw is mainly made to crush their food, so their teeth aren’t sharp, but it’s still not pleasant.

Give them a bit of space and try again later.

Coughing can sound like a small hiccup. If this occurs once or twice after eating, you don’t need to worry. It may be that they’ve been a bit too greedy and have swallowed their food too quickly.

However, if you notice the coughing noise occurring continuously over a few hours, it may be the sign that your gecko is ill.

Look out for other signs of illness, such as:

If you notice any of these signs alongside the cough, your gecko might have contracted a respiratory infection. You must get them straight to the vet to get the correct medication and treatment.

Learning to recognize the different sounds made by your gecko can help you improve their overall health and lifestyle. And sometimes even save their lives.

Some noises can be quite alarming at first, but the problem may be easily rectified, so listen to them carefully and act accordingly. Good luck!