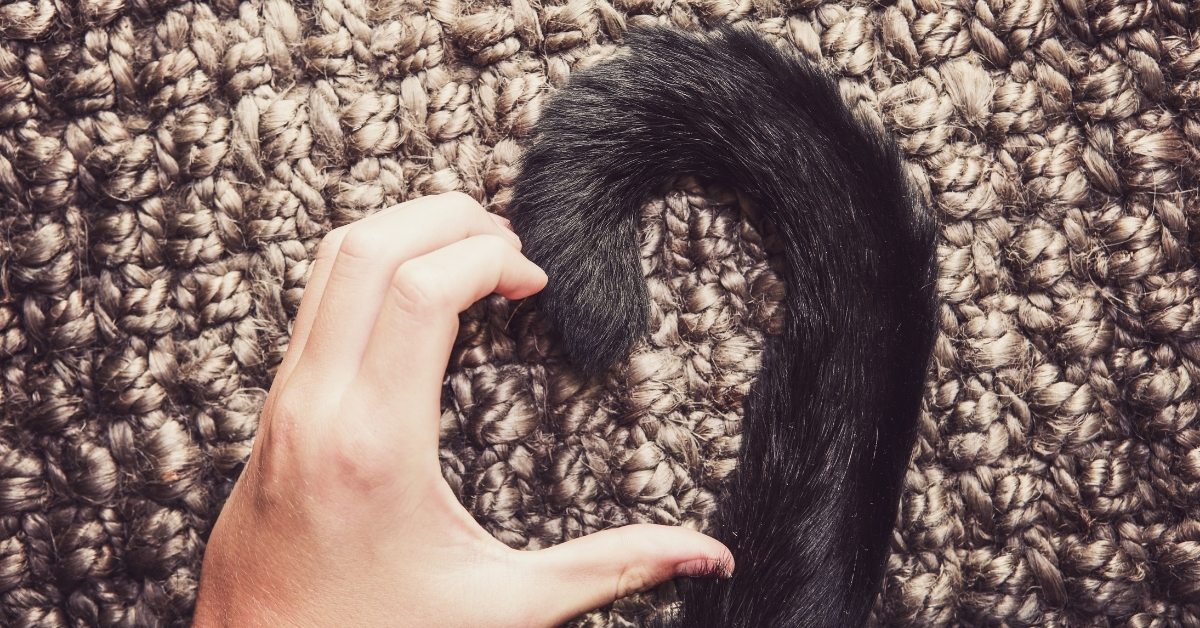 When it comes to cats, a tail is a prized possession and has various functions in their day-to-day life. Cat’s tails are essential for both balance and body language, helping them communicate with other cats or humans or cross even the narrowest of ledges.

Unfortunately, a variety of tail abnormalities can occur in cats, with kinked tails, often called crooked tail or broken tail, being one of the most common. Although this is not usually a serious issue, it could be, and there are several things to be aware of.

What Does A Kinked Tail Mean?

A kinked tail in a cat is characterized by a noticeable bend or angle, which gives the tail a crooked appearance. It is most often seen on the tail’s outermost tip and can vary in severity, with some kinks being very obvious and others being just slight bends.

But what causes a kinked tail, and what does it mean for your cat?

The most common cause of a kinked tail in cats is injury. Simply put, the tail is an extension of the spine, so it consists of many small vertebrae. Consequently, they can be broken or damaged, just like any other appendage.

This often happens when the tail is crushed by a falling object or trapped between something and injured as the cat tries to escape.

If you see a sudden change in your cat’s tail, this is most likely to be the cause, and you may also notice tender areas around the injury, swelling and abscesses.

Keep an eye out for behavioral changes too, as cats who have broken their tails will sometimes walk unevenly, drag their tails, or suffer from dribbling urine and diarrhea.

If you see any of these signs, consult your vet.

In many cases, injuries to the tail will heal by themselves. However, they can result in a permanent kink. If you just welcomed a new cat into your life and noticed a kink in their tail, it could well be a sign of a previous injury that has since healed.

As long as the cat is not in any pain or discomfort, this is not something to worry about, they will be able to lead a perfectly happy life without treatment.

Kinked tails can also stem from genetic variation, with some cats being born with the trait and others developing it as they age.

Cats such as the Siamese and the Burmese are particularly affected by these genes, although they can appear randomly in all breeds.

In general, cat breeders avoid using cats with kinked tails when breeding, so they’re pretty rare. This is purely for esthetic reasons, as cats with no visible flaws are usually seen as being more desirable.

Despite this, it’s not always possible to prevent kittens from being born with kinked tails because the gene is recessive, meaning two cats who possess it can give birth to kittens with kinked tails, even though the parents may not have the trait themselves.

Regardless, this is not a cause for concern. Cats born with a kinked tail will usually not suffer any issues with balance, movement or communication, and can lead completely normal lives.

There is only one form of disease in cats that results in kinked tails. Known as Manx Syndrome, this condition affects the Manx cat breed, which originates from the Isle of Man.

These cats have a unique gene – the Manx gene – which prevents the vertebrae from forming properly, meaning they are often born with no tail whatsoever.

When the tail does form, kinks are common. And unlike other genes that cause tail deformities, the Manx gene causes a range of health problems for affected cats, and it can even result in death in extreme cases.

The damaged tail/spine affects the central nervous system, with side effects such as constipation, partial paralysis, and hind limbs’ weakness.

In most cases, and especially if the tail is damaged towards the tip, it shouldn’t cause any permanent issues, and your vet will probably leave the injury to heal by itself.

If the tail’s injury is severe, partial or full amputation may be the best option, especially if the tail is paralyzed.

Although this can be a scary prospect, your cat will adapt to the loss of their tail and their mobility will not suffer from this in the long-run.

For genetically kinked tails, the treatment options will depend on how severe the side effects are. If your cat is not suffering, there is no need to seek surgery, as you will be putting your pet through unnecessary stress for purely esthetic reasons.

However, if the side effects inhibit your cat’s movement or causing other symptoms such as incontinence, your vet may recommend that the tail is either shortened or amputated. This will ease any discomfort or side effect.

If you have a Manx cat suffering severely from Manx Syndrome, unfortunately, there is no cure. Although many Manx cats can live happy lives with the affliction, some may not, and euthanasia might be recommended. Consult a few different vets first.

So, Can A Cat Live With A Broken Tail?

However, some cases aren’t so bright, as we’ve gone through in this article, and if you see your cat struggling, you should consult your vet regarding them.

This is everything you need to know about your cat’s kinked tail/broken tail/crooked tail. Hopefully you found an answer and your cat will live happily ever after, kinked or not kinked.

If you do want your cat to live happily, you better get some cat grass, check out our article about the benefits of cat grass!