Guinea Pigs vs Hamsters: Which Is The Better Pet 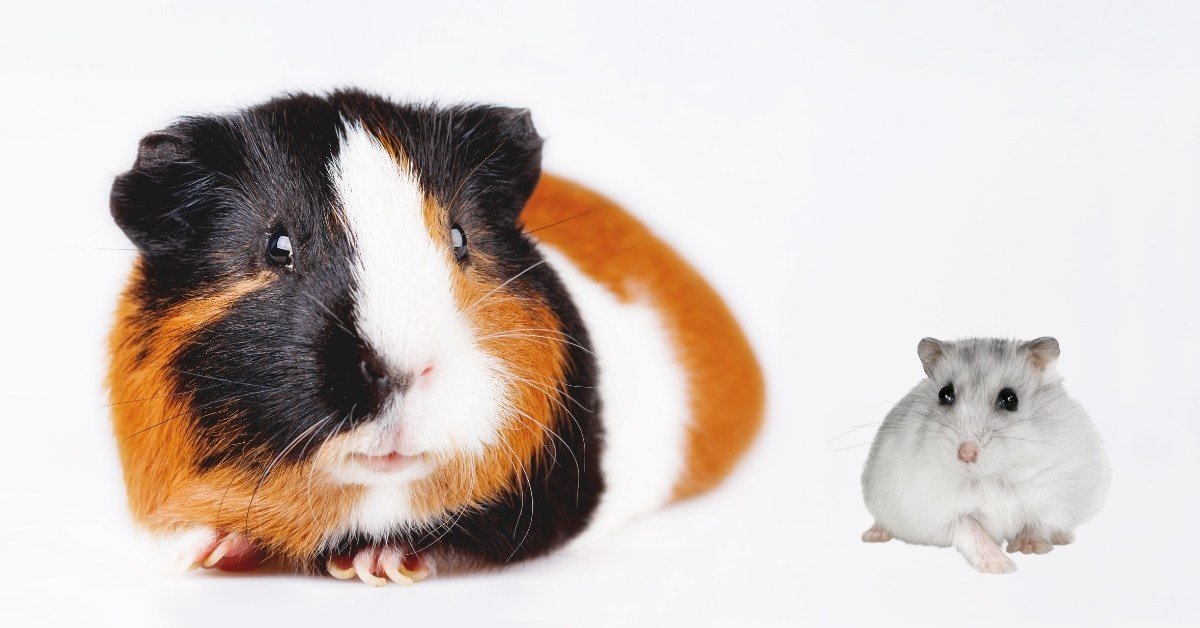 As two of the most popular small pets, guinea pigs and hamsters are often spoken of in the same vein. Both are equally cute, and if you’re looking to bring a small pet into your life, you may be torn between the two.

However, there are major differences between guinea pigs and hamsters, with each pet coming with certain advantages and disadvantages that should be thoroughly considered before a decision is made.

Discover which one you should get!

Guinea pigs and hamsters both come from the rodent family, but they are not as closely related as you may think.

Guinea pigs belong to the Cavia genus, a rodent group native to South America. There are 13 different varieties to choose from, ranging from long-haired breeds such as the Peruvian guinea pig to short-haired varieties such as the American guinea pig.

Hamsters belong to the Cricetinae genus originating in Eurasia and are more closely related to mice than they are to guinea pigs. Despite there being 25 varieties, only five are suitable as pets. The Golden and Dwarf hamsters being the most common varieties.

Size is an important factor when choosing a pet, as it determines how much space they’ll require. This is one of the most obvious differences between guinea pigs and hamsters, with guinea pigs being the much larger animal.

Guinea pigs are highly social creatures and enjoy (even need) the company of humans and other pigs, so it’s a good idea to keep them in pairs. If kept alone, they will suffer from boredom. And they will become depressed if not given regular attention.

This makes them a big commitment as you’ll need to spend regular periods interacting with them throughout the day, at least 2-4 hours in total.

Hamsters differ significantly in this respect, although sociability does vary from one hamster to another. In general, they are territorial creatures and will not kindly have other hamsters in their space. Some may even react aggressively.

As they’re naturally more independent than guinea pigs, they only require about 20 minutes of playtime a day.

Larger animals tend to live longer than smaller ones, which is the case when it comes to guinea pigs and hamsters.

The average life expectancy for a guinea pig is between 5-7 years, although some have been known to live for 14 years.

As hamsters are much smaller, their life expectancy is as well, with 2-3 years being the average. Some do live longer, with the oldest hamsters reaching around 7 years old.

Diet is another trait that differs significantly between guinea pigs and hamsters.

Guinea pigs are herbivores, meaning they feed only on plants. Therefore, hay, grass and green vegetables make up the majority of their diet, although they will also eat their own droppings as a way of upping their vitamin and mineral intake.

Hamsters are omnivores, meaning they feed both on plants and meat. As such, their diet is varied and incorporates seeds, nuts, fruits, vegetables and insects.

Guinea pigs are very social animals, so they tend to be quite vocal and are much noisier than hamsters. They produce a range of sounds – whistling or purring when happy, or squeaking loudly if agitated.

Hamsters make very little sound in comparison, only being vocal if they’re unhappy. However, they can make a lot of noise when using their exercise equipment. As they often do this at night, it can cause quite a disturbance if their cage is in or near a bedroom.

Both guinea pigs and hamsters need to be handled from a young age in order to be comfortable with human interaction.

Guinea pigs, however, are generally more docile than hamsters and are much happier to be handled. They’re also less fragile, meaning there is less chance you’ll cause them any injuries by picking them up.

Hamsters are more temperamental, especially if not used to being handled. This can lead to them biting their owners and being virtually unhandleable if not raised correctly.

Guinea pigs are crepuscular animals – preferring to be active in the morning or the evening. As a result, they will be happy to interact with you during the day, making it easy to exercise and play with them.

Being curious creatures, guinea pigs also require periods outside of their cages daily to satisfy their need to explore.

Hamsters are nocturnal animals – being most active after dark. Waking them up during the day to play can therefore upset them, and might even make them aggressive. As we’ve already mentioned, this also means you’ll probably hear them working out during the night.

As they’re less exploratory than guinea pigs, they only need to be outside of their cages a few times a week.

Hamsters are also known for being great escape artists, so their cages need to be well-built to ensure they don’t chew through them and runoff.

Most guinea pigs need to have their cages spot-cleaned daily, combined with a more thorough, weekly clean. As long as this routine is kept up, their cages should produce minimal smell.

Litter training guinea pigs is also possible which can significantly reduce the mess they make (check out our full guide).

Hamsters are cleaner, typically using one corner of their cage as a toilet. For this reason, deep cleans are required less often, typically once every week or two, and their cages are less smelly.

This is the end of guinea pigs vs hamsters!

In my opinion, guinea pigs are perfect if you’re looking for a more committing and affectionate pet-relationship, more similar to that of a dog or a cat.

And hamsters are better if you’re looking for an easier, more passive pet-relationship, more similar to that of a lizard or a snake.

So, which one are you going for? Let me know in the comments below!