Guinea Pigs vs Gerbils: Which Is The Better Pet For You 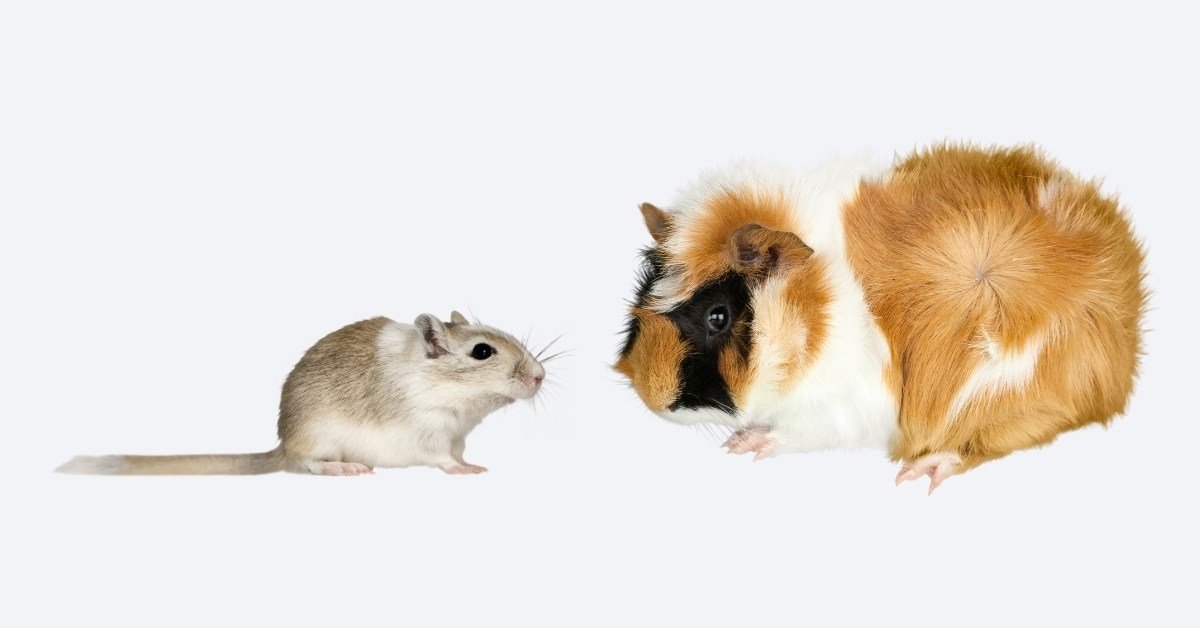 Gerbils and guinea pigs are two different species even though they look quite similar to each other. Because of that, they differ in almost every category, from personality to diet, to habitat.

This article will give you all the necessary information you need to decide which of these two furry little animals you want to have as a companion.

The main differences between the two are:

Guinea pigs are larger than gerbils.

If you put them side-by-side, the guinea pig will be the larger of the two every time. Their bodies are approximately twice as long as a gerbil’s.

Guinea pigs can grow to be 25-28cm (10-11in) long, while gerbils only reach 12-15cm (5-6in). Guinea pigs also tend to be a lot stockier than gerbils—they sort of look like baked potatoes when they curl up into a ball.

Gerbils have a tail that is about the same length as their body.

Guinea pigs generally have much longer fur than gerbils do.

While gerbils are still soft, fluffy, and pleasant to pet, their fur is not nearly as long as that of a guinea pig. Some guinea pigs have been bred to have fur up to 10cm (4in) in length. Gerbils have yet to be bred for longer fur.

Similar to those of a mouse but smaller in relation to its head. A guinea pig’s ears, on the other hand, are more comparable to those of a rabbit.

They are larger and floppy and sit on the side of their head. Both species can move their ears when excited, but guinea pigs will move theirs a lot slower due to the larger size.

The last, less noticeable difference between these two species is their feet.

You cannot see them if they are lying down, but they look like miniature kangaroo legs when they run around. Guinea pigs have much smaller feet and shorter legs.

This is one reason why they look so much stockier than gerbils to. Their tiny legs and feet keep them close to the ground.

This difference in feet and leg size means that both species behave differently. With longer legs, gerbils can frequently stand and survey their surroundings for predators. A guinea pig’s physiology does not allow them to do this.

Of all the small pets, gerbils are one of the tamest and easiest to handle. They are curious creatures and enjoy human touch, so you will have no problem handling them within a couple of weeks of bringing them home.

However, gerbils are not as easy to handle as guinea pigs and will take longer to fully trust you. They are also much smaller, so handling will be a bit tricky.

That being said, there is a correct way to pick your gerbil up. You want to let it hop into your hand rather than grasp it from above. In the wild, birds are their primary predator, so both gerbils and guinea pigs are very wary of being picked up from above.

Placing both hands down, one supporting their body and the other, their tail, will ensure they do not jump off frightened.

Putting a few sunflower seeds in your palm might just be enough to trigger your gerbil’s inquisitive mind and have it hop right into your hand without a fuss. Never force your gerbil to be cuddled or handled.

Guinea pigs are very friendly and create a strong bond with their owners quite quickly. Some even learn to come when you call them, similar to dogs.

Handling them soon after you bring them home should not be a problem. About a week or so is a reasonable waiting period while they get used to their new environment.

In contrast with gerbils, guinea pigs love the attention and enjoy being taken out of their cage to cuddle or run around. Although guinea pigs look quite sturdy, they are also quite fragile creatures.

It is crucial to provide spine support while handling them to ensure you do not injure them.

It is best if children under the age of ten sit on the floor when handling guinea pigs. They can often jump out of your lap and seriously injure themselves with a significant fall.

Make sure to keep a close eye on them when they are out of their cage (just like with gerbils)—they can get spooked easily, run away, and be quite tricky to catch.

While gerbils have a generally very tame demeanor, they have quite entertaining personalities and a lot of energy. That being said, they do like (and need) exercise.

You’ll need to include toys and things they can play with while in their enclosure. Little bridges and tunnels are good options to get them moving around.

Once your gerbil is used to you and their new environment, you will notice what curious and playful creatures they are. They are constantly digging, sniffing, climbing on things, and running around.

Gerbils have much more energy than guinea pigs. They can also become quite affectionate towards their owners with some patience and the right care.

Similar to gerbils, guinea pigs make fun and quirky companions for owners of all ages. They come with a lot of character and distinct, individual personalities.

You will experience affectionate nuzzling and the entertainment of them devouring hay and vegetables like it’s running out. Compared to gerbils, guinea pigs love the attention and love being held.

Tunnels and puzzles are also good ways to pique their interest and get them moving, especially during the winter months. It is also a good way to ensure they are getting the exercise they need year-round.

They generally have less energy than gerbils, so any activity encouragement is good for their overall well-being.

Gerbils do make noise—specifically, four main sounds that each have their own meaning:

Squeaking can mean several things, but you will usually hear your gerbil squeak if they feel frightened or threatened.

If your gerbil makes a purring sound, it means they are happy and content in their surroundings. Similar to when a cat purrs.

If your gerbil chirps, it is usually to get your attention – if they want to play, for instance.

A gerbil yipping is reserved for when they are really excited. You will commonly see this noise paired with your gerbil racing around its enclosure, hopping up and down on its back legs, or scrambling to get out of its cage if you are opening it up.

Gerbils are crepuscular, meaning they are most active during the twilight hours of dusk and dawn. Still, they can still be quite noisy at night from time to time. They will occasionally be running around, playing, and chirping.

Guinea pigs make a lot of similar sounds to gerbils. They purr to show contentment, chatter their teeth when they are getting aggressive, coo for reassurance, rumble for mating, and wheek for excitement.

Unlike gerbils, guinea pigs will be loud for specific reasons. Of course, they will run around at night, but they will usually only vocalize (wheek) only if they need something like food.

The wheeking can get very loud and obnoxious, so it is something to keep in mind when considering a guinea pig as a pet.

Both animals are not recommended to keep in your bedroom.

Gerbils do not live for a very long time. The average lifespan of a gerbil is 2-4 years. However, some have lived as little as one year, while others have survived up to five years. It’s up to your care and, unfortunately, luck.

Guinea pigs have a relatively longer lifespan than gerbils do. They average between 4-8 years.

Gerbils enjoy a variety of different foods. As a desert species, they would normally eat whatever they can get their paws on. In the wild, their diet consists of grasses and grains scavenged from the area around their burrow.

In captivity, as your pet, they enjoy their dry mix food as well as fresh foods like fruits and vegetables. That being said, it is essential to mix fresh food with their dry food for a wholesome diet. Here is a starting list of what gerbils can eat:

Guinea pigs also enjoy eating a wide variety of food, such as grass, dry food, hay, and some fruits and vegetables. They need this kind of variety in their diet with particular foods because they cannot manufacture their own vitamin C.

Typical foods for guinea pigs include:

Some other foods are still safe for guinea pigs, but only in moderation. For example, fruits are high in sugar and acid, which can cause painful sores around their mouths if fed too often. The foods they can eat in moderation include:

Both gerbils and guinea pigs need the standard cage with hay for burrowing, toys, and access to food and water. But there are other things about their enclosure that are not self-explanatory.

Your gerbil will firstly need a cage that they cannot gnaw through. You would be surprised at how easily they can chew through certain woods and plastics.

Next, they will need adequate space to move around as they will be spending a lot of their lives in this cage. As long as their enclosure is large enough (20 gallon or 2,500 cm² or 400 sq inches).

Compared to guinea pigs, gerbils need more vertical space since they enjoy climbing on things. So take that into consideration when choosing a cage.

Gerbils will also need a lot more bedding to satisfy their need to dig and tunnel. Although guinea pigs like to tunnel, they do not require bedding as deep.

Guinea pigs, unsurprisingly, need quite a larger enclosure (50 gallon or 7,000 cm² or 1,000 sq inches). Although you don’t have to be so careful with the material since they’re not such talented escape artists as gerbils are.

Unlike gerbils, guinea pigs also need a run, which is a large flat area to run around. Guinea pigs are not as fast and agile as gerbils are, so the run ensures they will get enough exercise.

Guinea pigs are also much more sensitive to temperature than gerbils. If the temperature drops below 18°C (65°F), they can easily develop respiratory infections. So while they can be housed outdoors or indoors, you must make sure the temperature is right.

Note: It is crucial to know that guinea pigs are much more social than gerbils and should be bought in pairs (or given a lot of attention). Meaning you’ll need a roughly 30% larger cage.

Hopefully, this article answered all of your questions about the differences and similarities between gerbils and guinea pigs. Now, go get your new friend!