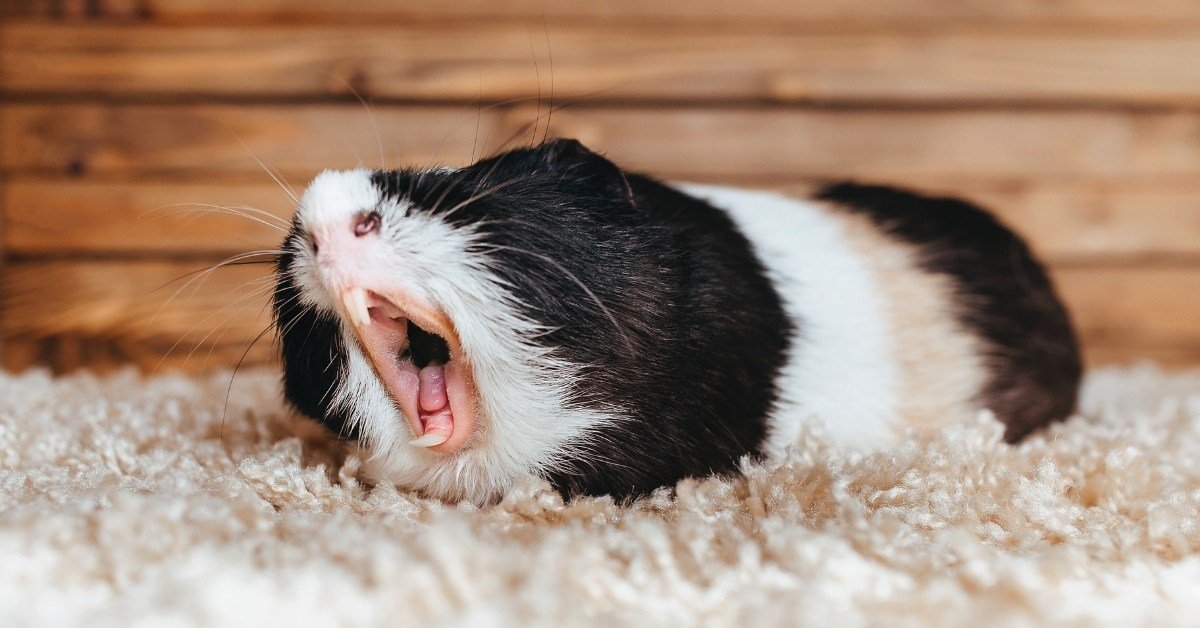 Guinea pigs are incredibly vocal creatures who are not afraid to noise how they feel. Sound is their primary means of communication – playing an essential role in establishing group bonds and maintaining social rank.

And they make quite a range of noises, with each one having a specific meaning. Knowing the meanings can be very useful for owners, as it makes it far easier to understand what your pet likes or doesn’t like. Or perhaps, if they’re injured or ill.

Let’s see some of the most popular sounds a guinea pig might make, and what they mean.

Chirping in guinea pigs sounds very similar to chirping noises made by birds.

So why do guinea pigs chirp? There is some debate around this question, but it is generally thought that chirping is a sign of an unhappy guinea pig. If your guinea pig is behaving like this, it is probably an indication that they are either scared or stressed.

It is also often noticed in guinea pigs who have recently lost their partners, representing some form of grief in those cases.

Whistling in guinea pigs is a long, high-pitched whistling sound, like an elongated squeak.

Why might a guinea pig whistle? This is one of the most common vocalisations, and they’ll usually do it when they’re excited.

Purring in guinea pigs sounds similar to the purr of a cat, although it is usually quieter.

So why do guinea pigs purr? When guinea pigs vocalise in this way, it usually means they are happy and content.

Most often, it happens when their owners are petting them or while they are being groomed. It may also be heard when a guinea pig’s eating food they really like. It is simply a sign that they are enjoying themselves.

Vibrating is similar to purring. However, it happens at a much higher pitch.

Why do guinea pigs vibrate? Vibrating means your guinea pig is annoyed. It is often the initial stage of a threat display.

Vibrating usually happens because a guinea pig is unhappy about how they are being handled or because they have been scared by a loud noise, sudden movement, or something similar.

Your guinea pig may appear to shake while making this noise, and they will be very tense. Calm them down by petting or giving them a treat.

Rumbling in guinea pigs is a similar yet deeper sound than a purr.

Why might a guinea pig rumble? Rumbling comes down to one thing – mating. Female guinea pigs make a rumbling sound to let males know that they are ready to mate, while males make the same sound to attract a female.

If both animals in a pair are rumbling, it might be accompanied by short mating dances. Female guinea pigs come into season around every 16 days, so this sound can be quite common.

Teeth chattering in guinea pigs sounds like teeth being gnashed together rapidly, although it may come across as a hissing noise.

So why do guinea pigs make a teeth chattering sound? Well, this is an aggressive vocalisation and should be interpreted as a guinea pig saying “back off”.

This threat can be made towards humans or other guinea pigs and signifies that the animal may turn violent if not left alone. Often it is accompanied by baring the teeth, in a way that looks almost like a yawn.

Chutting is a noise that sounds similar to a frog croaking, usually made in a series of vocalisations, kind of like a dog whimpering.

Why might a guinea pig make a chutting sound? This is a positive noise made when a guinea pig is content, usually when they are exploring their surroundings.

The purpose of the noise is often compared to human humming, with it just being a sign of a guinea pig who is happily going about their daily business. Chutting may also occur during feeding.

Cooing in guinea pigs is a gentle purring noise, similar to the cooing of pigeons.

But why do guinea pigs coo? This sound is most often produced to reassure other guinea pigs or to elicit a calming response in offspring.

It’s therefore common to hear a mother guinea pig cooing to her babies. The sound can also be a sign of affection, and you may find your guinea pig will coo while they are being petted as a way of showing their love.

Despite their cuteness, guinea pigs will sometimes produce a growling sound that is low-pitched and threatening.

So what makes guinea pigs growl? Growling usually occurs when a guinea pig feels scared or threatened by something in their environment. It can be confused with purring but you’ll usually be able to distinguish by their behavior, perhaps if they’re also puffed up.

If your guinea pig reacts in this way, approach them very carefully while talking in a soothing tone, as they will be wary about being touched.

Squealing is a very high-pitched noise that is often elongated.

Why do guinea pigs squeal? Squealing is similar to whistling in that it is made when a guinea pig is excited. They often make this noise in anticipation of getting a tasty treat when they recognise the packet’s sound or look.

It can also be a sign that a guinea pig is looking for some attention, with a loud squeak serving as a way to call their owner over for some quality time.

Guinea pig shrieking is a distressing sound, being a very piercing, high-pitched call.

So what makes a guinea pig shriek? Shrieking is unmistakably a sign of intense fear or pain, meaning your guinea pig is very upset.

There will usually be an apparent reason for this, so check them for any physical injuries or look for dangers in their vicinity. If it occurs while you are handling them, you might be too rough.