Chinchilla Dust Baths: Everything You Need To Know 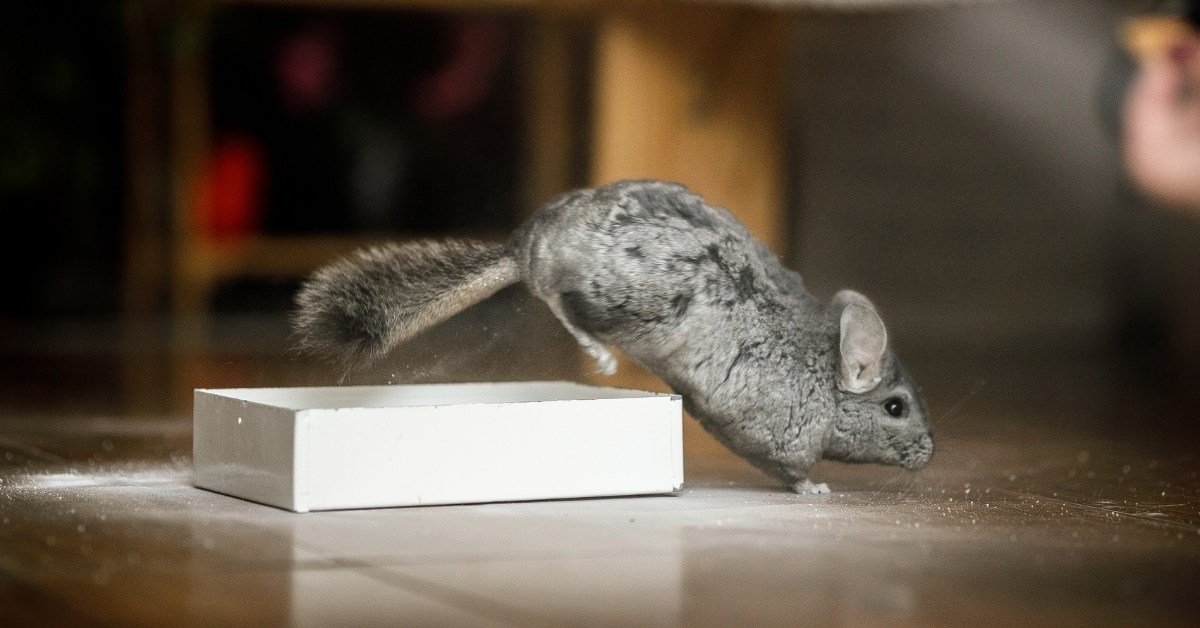 Chinchillas may be one of the cutest, softest little mammals you will ever see. They have between 60 and 70 hairs sprouting from each follicle, giving them the densest fur of any land mammal.

Most other mammals, including humans, only grow one hair per follicle, so you can imagine just how thick a chinchillas coat is with this comparison.

That comes with a big problem; their supremely dense coat does not dry easily. In fact, a chinchilla getting just a bit wet can lead to awful fungal infections.

This article will detail everything you need to know about chinchilla dust baths—the chinchilla version of our soap and water bath.

Why Do Chinchillas Dust Bath?

The most straightforward answer has to do with the density of their fur. Since chinchillas have about 70 times more hairs per follicle than most other mammals, a regular bath with soap and water is not a good idea.

Due to the sheer thickness of their coats, it is extremely difficult to ensure it dries completely. Moisture gets trapped close to the skin and can cause an array of complications.

Allowing them to bathe in fine dust helps distribute the natural oils they produce evenly, clear away dirt and debris, and ultimately leave their skin extra soft and smooth while leaving their fur dry.

Chinchillas are native to arid habitats in the mountainous regions of South America. Out in the wild, they would use volcanic ash for their dust baths.

Therefore, it is essential to be conscientious of what dust you are purchasing as many of the store-bought dust packages vary significantly in quality.

When buying dust for your chinchilla’s bath, look for packages that say “100% volcanic ash”, and make sure it is sourced and produced without any additional chemicals.

How Do You Give A Chinchilla A Dust Bath?

The first thing you will need to give your chinchilla a dust bath is a bath house. A chinchilla’s bath house is a container made of either plastic or ceramic that, unsurprisingly, holds the dust for the dust bath.

They need to be sturdy since chinchillas are naturally active and agile creatures. They will flip, flop, and roll like crazy in this container to ensure they are entirely coated in the dust.

How To Choose A Container

When choosing a container to bathe your chinchilla in, make sure it is big enough for them to roll around in and stable enough that it does not tip over.

Again, chinchillas tend to get pretty worked up during their dust baths, so it is a good idea to use a bath house that can accommodate their movements.

You can also opt for an enclosed bath house that will limit the amount of dust that your chinchilla will inevitably throw everywhere during their dust bath. Other than reducing mess, it guarantees a complete coating of your chinchilla’s fur.

How Much Dust To Put

They are so efficient at performing their little “dust dance” that 2.5-5cm (1-2in) of dust at the bottom of the container is more than enough for your chinchilla to bathe properly.

Which Dust To Use

When browsing the pet store for suitable dust, you will see other dust-like products for various exotic animals. Regardless of how similar they appear, it is imperative never to use any dust packaged for animals other than chinchillas.

Some of these types of dust have a coarser consistency like sand, which increases the likelihood of particles getting trapped at the base of the hair increases. If these particles do get caught, it can lead to skin irritation and infection.

The last thing to note when giving your chinchilla a dust bath is to limit the time they have access to it.

The following sections will elaborate on why this is important, but usually, around 5-10 minutes is enough time for them to clean themselves thoroughly. Any longer than that and they might mistake the bath for a bathroom.

Are Dust Baths Bad For Chinchillas?

Dust baths are not bad for chinchillas at all. Problems will only arise if they have too many baths or bathe in the dust for too long. Yes, overbathing can cause your chinchilla’s skin, feet, and ears to dry out.

Which brings us to the next section.

How Many Times A Week Should You Give Chinchillas A Dust Bath?

So, as previously mentioned, too many dust baths can cause chinchilla’s feet, ears, and skin to become overly dry. In general, you will want to limit their dust bath time to 2-4 times per week, depending on each chinchillas’ needs.

The frequency of dust baths depends primarily on what weather or climate your chinchilla is living in.

In very hot and humid climates, chinchillas will generally need access to their dust baths closer to four times per week. However, in colder, more dry climates, two times a week should be plenty.

Aside from the hygienic reasons to give your chinchilla consistent dust baths, these baths are also great for their mental and physical well-being. Chinchillas absolutely love taking dust baths.

Can You Leave A Dust Bath In A Chinchilla’s Cage?

Since they enjoy their dust baths so much, they might be tempted to roll around in them more often and for more extended periods of time, drying their skin out completely.

It is also not a good idea to leave a dust bath in your chinchilla’s cage because they can mistake it as their litterbox. Of course, this is something you want to avoid.

If your chinchilla goes to the bathroom in its dust bath and you are not aware of it, it is very possible that it will be rolling around in its excrements—which, well, sort of defeats the purpose of a bath.

That is why it is essential to limit your chinchilla’s time in the dust bath and supervise them while they are in it. Doing so will ensure the dust is clean, allowing you to re-use the same dust multiple times.

Although you will still want to keep a close eye on the dust you are re-using and be sure to change it if it starts to get clumpy or soiled.

How Long Can A Chinchilla Go Without A Dust Bath?

The frequency of dust baths for chinchillas varies greatly and depends on several factors. Technically speaking, they can go their whole lives without having a dust bath, though it is really not recommended.

Dust baths are first and foremost used for looks and comfort. It is often compared to humans washing their hair—we won’t get sick and die if we do not wash our hair, but we will feel greasy and uncomfortable.

So if you can’t give your chinchilla a dust bath for a few days, don’t worry about it.

With that being said, certain circumstances call for either more or less frequent dust baths:

Obviously, chinchillas have no control over where dust flies when they are taking a dust bath. This means there is a possibility that the tiny particles can get stuck in their eyes.

If this happens, it can cause irritation, redness, swelling, and even a runny eye.

A runny eye can cause the fur around your chinchilla’s eye to become wet, which may lead to infection, and in extreme cases, the loss of the eye.

If eye irritation occurs, limit baths to once a week or even less if it’s really bad.

Not all chinchillas have the same fur density. Those with thinner fur tend to get oily less quickly, thus needing less frequent dust baths.

At the same time, chinchillas with a thicker coat would prefer more frequent dust baths to control the oil.

It sometimes happens that your chinchilla will spill water on itself or get unusually dirty. If this occurs, throw your dust bath schedule out the window and give them one immediately.

You never want to leave your chinchilla with a wet or dirty coat as it can lead to infection, and in severe cases, even ringworm. You can return to the original schedule after this issue is resolved.

If your chinchilla has bumblefoot or any open wound, refrain from giving them a dust bath until their wounds are completely healed.

Same with bumblefoot, which is similar to the cracked hands we sometimes get during the winter. Dust baths will just dry out and irritate these wounds more, thus delaying recovery.

Contrary to popular belief, chinchillas can get parasites in their fur, most often where it is thinnest, like on the thighs and tail.

Daily dust baths are recommended to combat fleas or mites, and you may continue until they are gone or until you see start to see signs of overbathing.

Often time, a dust bath can trigger an asthma attack if you have this condition. You can reduce the frequency of dust baths for your chinchilla to once a week which would trigger fewer attacks but still leave your pet happy and comfortable in its fur.

Although the best course of action would be to ask someone to bathe them outside. Or, getting a guinea pig.

The humidity level should be below 50% for your chinchilla. High humidity can cause your chinchilla’s coat to become damp, so more frequent dust baths can mitigate this effect.

Depending on how moist and humid it is for your chinchilla, daily dust baths might be necessary. Again, make sure they do not show signs of drying out from overbathing.

It is not as essential that babies take dust baths regularly as their fur has not reached its maximum density yet. A baby’s coat is a lot thinner than adult fur and therefore takes a lot more time to get oily and dirty.

Well, there you have it—everything you could possibly need or want to know about chinchillas taking dust baths. Hopefully, this answers your questions and concerns regarding bathing these exciting little mammals.