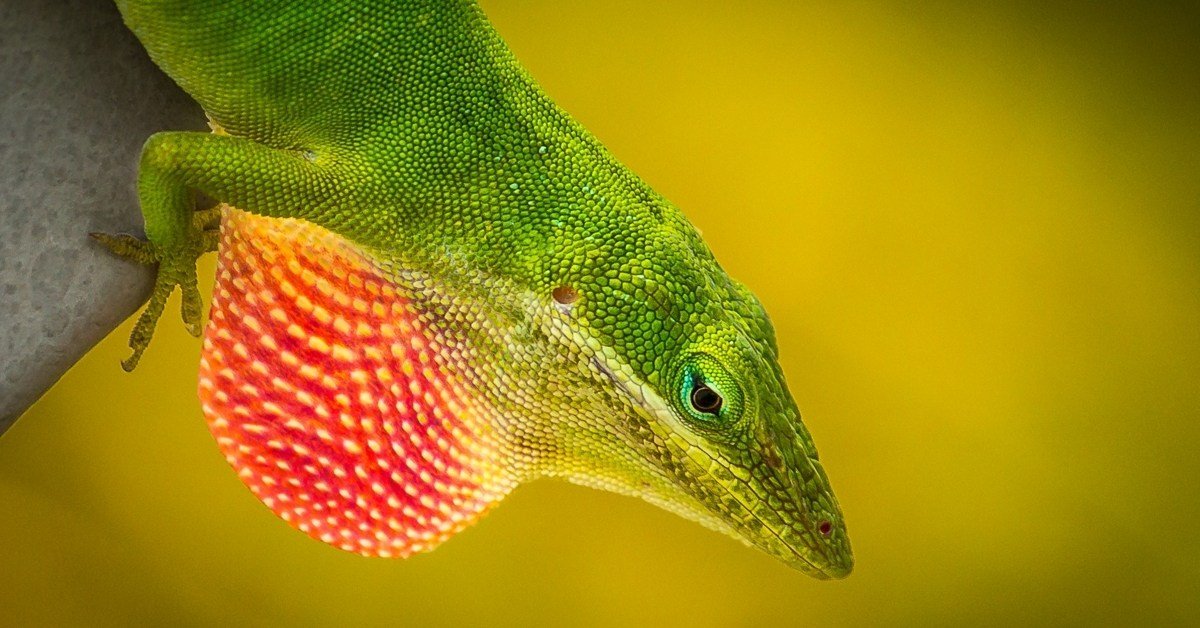 Anoles are one of the most studied species of reptiles in the world. And although other creatures have their versions of a dewlap, anoles are the most notable.

This article will discuss why anoles have dewlaps, how and why they show their dewlaps, and how the dewlap varies between different species and genders.

First, what is a dewlap? A dewlap is a fold of loose skin hanging from an animal’s neck or throat. The dewlap is an integral part of an anole’s life and survival, as you will soon discover.

Why Do Anoles Show Their Dewlap?

Anoles show their dewlaps for two main reasons and one very unique one. These reasons specifically apply to male anoles.

The first reason they show their dewlap is to attract a female during the breeding season. When males extend their dewlap, it shows the female anole his intent to mate. When the female gets close enough, the male will chase her down, bite firmly on the nape of her neck, and begin the mating process.

The second reason they show their dewlaps is to defend their territory from other males. This reason goes hand in hand with the breeding season as male anoles often have to fend off other males interested in the same female. Showing their dewlap makes them appear larger in hopes of asserting their dominance over other intruding males.

And the last unique reason anoles show their dewlaps is to distinguish between members of their species and other species. They can do this because their dewlaps come in a variation of colors such as:

Anoles have enhanced color and depth perception, which enables them to see the color difference in dewlaps on other anoles.

Pterins and carotenoids are the two primary pigments generating the various colors of anoles’ dewlaps. Anoles can most easily see these two specific pigments.

(Check out our full care guide for green anoles in a new tab.)

Why Do Anoles Have A Dewlap?

Anoles have a dewlap primarily for attracting females and for males to establish their territory among other males.

Early hypotheses suggest that dewlaps evolved to serve a role in sexual signaling, indicate age-related fighting ability, or make themselves look larger in front of their rivals.

Another reason could be for animals to make themselves appear bigger to predators for safety.

Anoles have taken this evolution a step further. Not only do they use their dewlaps for sexual signaling and warding off enemies, but they are also color-coded among members of the same species.

The color variation is an excellent example of the role of environment and natural selection in animal signals’ evolution.

Identifying other species by the color of their dewlaps allows anoles to avoid wasted effort in courtship and territorial disputes. They can quickly and easily identify members of their own species, thus more easily pick out enemies or rivals.

Do Female Anoles Have Dewlaps?

The short answer is yes; most female anoles do have dewlaps. However, they tend to be much smaller and brighter in color than male dewlaps. Depending on the species of anole, some females might not have a dewlap at all.

What Does Social Selection Mean

As related to the dewlap, social selection means male mate choice or female on female territory defense. The size of female dewlaps demonstrates a negative correlation with sexual size dimorphism.

Contrarily, the female dewlap was much smaller or non-existent when more differences were observed between both sexes (beyond sexual organs).

What Does Sensory Drive Mean

When related to the female dewlap, sensory drive talks about the correlation between microhabitat use and the size of the female’s dewlap.

The natural selection of dewlap size favors the signals effectively transmitted through the female’s local habitat.

In other words, female anoles who live in a more dense habitat evolve to have larger dewlaps. The larger size dewlaps allow the females in dense microhabitats to signal and communicate more effectively at a greater distance.

The opposite is true for female anoles who live in less dense habitats. A prominent dewlap is unnecessary for them since there are not many obstacles interfering with them being visible from far away.

Depending on their habitats’ density, some females evolved to the point of not needing a dewlap at all.

Do All Anoles Have Dewlaps?

The majority of anoles have dewlaps. As previously discussed, all males have different color dewlaps depending on the anole species in question. The exceptions come up when we look at the female anoles.

Although they are smaller than those of the males, several female species do have dewlaps. However, the dewlap for some females is non-existent.

Dewlaps in anoles differ significantly across different species. Their local habitats play a significant role in deciding what kind of dewlaps certain anoles will have.

Again, since males all have large ones due to mating processes and territorial battles, aside from color, these differences apply primarily to the female sex.

Since females do not have as much of a need for dewlaps as males do, their dewlap size or presence relies solely on the environment in which they live.

Initially, the theory for female dewlaps was that they are a genetically correlated by-product of male dewlaps’ selection. As we have seen, this is not the case. Unlike male anoles, there is also an environmental factor in the presence of dewlaps in females.

Anoles are one of the many animals on this planet that have dewlaps. Their evolution has caused them to have unique dewlap uses that extend beyond the usual reasons.

Those typical reasons being males attracting females during mating season and males fighting over territory. Females occasionally have territorial disputes with other females, but this is rare.

While all males have dewlaps, not all female anoles do. The female dewlaps size grows as their habitat becomes denser to allow for easier long-distance communication within their species.

The anoles’ use of dewlaps is unparalleled in the animal kingdom. The way they show their dewlaps and have so much variation between species is a fantastic example of natural selection and the effect that the environment has on evolution.

Hopefully, this sheds some light on the purpose and uses anoles have for dewlaps. They are, without a doubt, one-of-a-kind animals.